Helping Each Other — It’s Not So Hard

If you like this blog, send it to 3 (or more) of your friends and encourage them to sign up. Let’s get the conversation going!

I’m in Ashland, Oregon as I write this. We (my life-partner Susie and I) come here two times every year so we can see all the plays that the Oregon Shakespeare Festival (OSF) 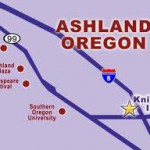 does in repertory from March through October. Though I can’t walk as far as I did the last time I was here, and my speech is more impaired, I can still enjoy the theater, and I do.

Despite its name, OSF does a lot of plays that were not written by William Shakespeare. Each year, the company produces 12 plays (by high season in summer, there are 5 productions a day, in 3 theaters). No more than 4 of those 12 are by Shakespeare. On this trip, we saw 3 plays – The Imaginary Invalid by Moliere (fabulous!), To Kill a Mockingbird, based on the book by Harper Lee (also fabulous), and a new play called The Language Archive by Julia Cho (very intriguing and well done).

We have routines here. They involve walking around the main drag, having lunch (and sometimes dinner) at a restaurant called Pangea, eating chocolate-covered frozen bananas for dessert from the local Rocky Mountain Chocolate Factory, discussing the plays, and playing table top games. Very relaxing, in an intense theater-going kind of way.

An interesting thing happened on the way to the theater

At the end of our lunch one day at Pangea, as we were about to head off to our afternoon play, I had to wait for a restroom to become available. The woman who came out of the restroom for which I was waiting stopped when she saw me and asked whether the microphone I was wearing was because I was having trouble with my speech. I told her

yes, and she explained that she has a friend with Parkinson’s disease who is having trouble with her speech. I showed her the voice amplifier I use, told her the name of the company that makes it and explained that I found it on line for about not very much money.

The woman who asked me about the device was so pleased! Here was something so simple — and so relatively inexpensive — that might actually help her friend.

That exchange of information outside the restroom in Ashland reminded me of a phone conversation I had back in 2004 with a woman named Amy Langer, the founder and CEO of an organization called NABCO – the National Alliance of Breast Cancer Organizations. (NABCO was a national organization, but it wasn’t really an alliance of breast cancer organizations, and the kind of information they provided reflected the enormous amount of funding that NABCO got from the pharmaceutical industry – but that’s a topic for another blog.) Amy had called to tell me that NABCO was closing. One of the reasons was that the kind of support that NABCO offered to breast cancer patients by connecting them to each other was, in Amy’s view, going to be less and less needed, as more information became available in other ways.

I thought Amy was wrong then. People always want to connect with others who have had experience with whatever they are confronting. A website or a book doesn’t do the trick. The number of calls and emails that Breast Cancer Action got when I was there (and still gets, I’m sure) from women wanting to know something they can find out only by connecting with others with breast cancer, as well as the ongoing appeal of support groups

for people who are ill, is a testament to how wrong Ms. Langer was in 2004.

And my experience in Ashland with the voice amplifier tells me that the need to connect – and the value of connecting – to exchange useful information is real for all sorts of conditions.

How did I come to know about the voice amplifier? The terrific speech therapist at the Forbes Norris Center, where I’m receiving care for ALS, suggested months ago that I should use one to preserve my voice. That way I would have less strain when I try to speak loud enough to be heard, which is becoming progressively harder to do, and is hardest to do by the end of the day when I’m more tired. I bought a voice amplifier back when she made the recommendation, but didn’t use it much

When I saw the therapist again more recently, she urged me to use the amplifier all the time, so I wouldn’t find myself in situations where I was straining my voice unnecessarily. So I’ve started doing that.

I walk around now with a little black box (that is not a smart phone) on my hip, with a wire that runs from it to the headset I wear. The headset has a microphone that is very noticeable. I’ve been asked by people whether I’m on the phone, on the air, or projecting my voice for fun. I’ve taken to explaining — with humor, of course — that I’m impersonating Lady Gaga. Turns out, the credit actually goes to Madonna, as Peg Stevenson appropriately points out in a recent comment.

I’m sure many people wonder about why I’m wearing this thing, but don’t ask. I see the looks on peoples’ faces. But when people do ask, I’m happy to try to explain, especially if what I’ve learned can be helpful to someone else.

I’m damned if I know why doctors who treat Parkinson’s patients don’t know about voice amplifiers, or, if they do, don’t recommend them to their patients who having trouble speaking. But I’m very glad that I do, and I’m happy to help provide other people with helpful information. I trust they will share with me, too. And when someone figures out how to keep the voice amplifier from its awful — but not frequent — feedback, I would be delighted — as would all the people around me – if they would share that information!

If we stay connected, we all do better.

The model I bought is made by Aker, and you can find them on line for as little as $55. The microphone that comes with the Aker is not as sturdy, or as good, as one made by

Luminaud, called a HI-GAIN HEADBAND MIC that sells for $85. You can check it out at http://www.luminaud.com/

11 Responses to Helping Each Other — It’s Not So Hard