Is October Over Yet?

October is often a beautiful fall month. It’s also my birthday month. But I learned early in my tenure at Breast Cancer Action to dread the month because everything turned pink. I had hoped that when I stepped down from my job, I could get back to having October just be a month. But once a breast cancer activist, I guess always one. So I still feel inundated in October.

This month has so far been no exception. It’s hard to decide what the worst offender was among the things that turned pink this month. Was it the garbage truck for the cure in 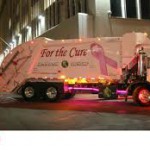 Garbage for the Cure

New York City? Was it the oil rig painted pink? Was it the Lord & Taylor “Pink Carpet of Beauty?” Was it American Airlines (the only airline currently losing money) Fly for the Cure effort? Or was the winner the pink cleats on those NFL football players as they pummeled each other on a recent Sunday? Or maybe it was the Komen for the Cure 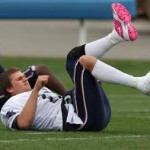 Pink Cleats for the Cure

Foundation’s “Promise Me” perfume, laced with a lot of ingredients that are known to increase the risk of cancer (you 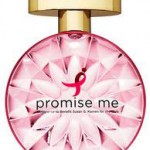 From Komen: the ingredients could kill you

can act to stop this one at http://thinkbeforeyoupink.org/).

Maybe you have a favorite in the “how low can we go with pink” contest. If you do, send to Breast Cancer Action so it can be used in the organization’s Think Before You Pink campaign.

A Ray of Sanity from the New York Times? Sadly Not.

I don’t read the Sunday New York Times in October or any other month. I won’t spend the kind of time it requires to read it carefully. I figure that if there’s a important article in it, a friend will tell me about, or I’ll stumble on it in the iPad New York Times app. But, probably because of my background, I did quickly find an article published by the Times on October 15 which gave me a little hope that we would finally have an in-depth investigative report about the pinking of America. After all, the new (and first female) executive editor of the paper says she’s dedicated to having more investigative reporting.

Entitled “Welcome, Fans, To the Pinking of America,” the article by Natasha Singer appeared, appropriately enough, as the lead story in the paper’s business section, So far, so good. And early on there are acknowledgements that not everyone likes the pinking of everything. But it becomes quickly clear that the article is about how successful the Komen

Foundation has been in making breast cancer into a multi-billion dollar marketing opportunity to support mammography screening and breast cancer education, and not about how this effort has left most of the public completely in the dark about the realities of breast cancer.

The article quotes Nancy Brinker, the founder of Komen as follows: “It’s a democratization of a disease. It’s drilling down into the deepest pockets of America.” So this is what democracy means, getting money out anyone you can find? Funny, I thought it meant people participating in the political process by which decisions that affect their lives are made. How did we get to this?

I blame the Komen Foundation, the leading but not the only beneficiary of products sold with pink ribbons on them. It is Komen that has, in the article’s words, “rebranded an entire disease by putting an upbeat spin on fighting it.” And it’s done that by marketing, and by drilling into the buying public messages that are wrong-headed in the extreme. Those messages range from how much progress has been made in breast cancer to how mammograms are all anyone needs to know about breast cancer.

One thing that the New York Times article makes clear is that, while consumers are encourage to buy products to support breast cancer research, Komen spends twice as much on education as it does on research. So if you think that by buying pink you’re funding research, think again.

I won’t attempt to summarize the rest of the New York Times article, since it mostly a promotion of Komen’s approach. While it mentions that Komen’s message may oversimplify breast cancer issues, it hardly says why or how.

While Pinktober was raging and the buying opportunities mounted, I was the unhappy recipient of a fundraising letter from Komen. Seems the millions that the Foundation raises from corporate partnerships isn’t enough, so they do a lot of direct mail. The letter contains the following statements:

—  “Our single minded focus [is] on finding the cures”

Most of the letter focuses on how much Komen funding has accomplished and how  Komen is going fund the cures for breast cancer if I write a big check (not). But what does it mean 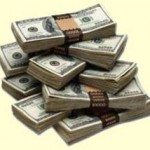 Komen has invested billions: for what?

to “imagine life without breast cancer”? I don’t know how I can do that with so few resources devoted to finding and eradicating the causes of the disease. And while the letter mentions in passing that Komen funds this kind of research, I know for a fact that it is a very small part of the Foundation’s portfolio, and that they ignore many of the findings that come from that research. The Foundation’s information about environmental links to breast cancer is flat out wrong in a lot of places.

At the invitation of someone associated with an organization called the Breast Cancer Sisterhood, Komen agreed to respond on a blog hosted by the Sisterhood to questions and criticisms raised by others in the breast cancer “community.” The person who wrote on behalf of Komen is the “Director of Marketing and Communications.” Though there was supposed to be a give and take with the Komen representative, she (the Komen rep) posted one message defending Komen and failed to answer many questions. As far as I can tell she hasn’t responded to subsequent comments. Read it yourself by following the link. So much for dialogue.

And Komen is not alone in claiming the ground of funding all the progress in breast cancer.

Another version of the ribbon

The Breast Cancer Research Foundation (BCRF) took out a couple of full page ads in the New York Times to tell people how so much of the progress in breast cancer it has funded. It reads a lot like Komen’s claims. Of particular note to me is that much of the funding for BRCF comes from not just pink products but directly from the Estee Lauder Companies. They make cosmetics and they founded BRCF, which is committed to “prevention and a cure in our lifetime.” The first part will be particularly tricky so long as Estee Lauder refuses to sign the compact for safe cosmetics and continues to use toxics in their products. Hypocrisy? You betcha.

Seems all the big players use Pinktober to cover up one thing or another about breast cancer.

A Word About Mammograms

Since Komen thinks everyone should get a mammogram, and that’s all they talk about in October, a couple of things of note on this topic. 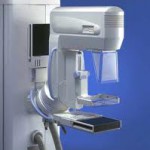 Just as the month was drawing to a close, a new study was issued that shows that mammograms result in a great deal of overtreatment, and actually only help at most 13% of women whose breast cancer is found by mammogram (that’s about 18,000 women per year of the 138,000 diagnosed by mammograms. I could go into a long explanation about why this is true, but Breast Cancer Action has already done a pretty good job of explaining it. Take a look at the organization’s policy on Screening and Early Detection, particularly the section starting on page 3 about the biological complexity of breast cancer and its impact on early detection. Maybe if the folks at Komen read it they would learn something.

Is it any wonder that I want October to end, and soon?

11 Responses to Is October Over Yet?