In September of last year I wrote a blog on disability access, based on my experiences then traveling in an increasingly disabled condition.

Five months later, I’ve done more traveling. And, as my ALS progresses, I have more 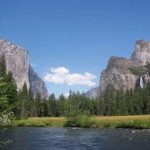 Yosemite Park. It really is this beautiful.

physical limitations. My most recent trip long trip was to Yosemite National Park, a place that my partner Susie and I love and have visited many times in our many years together. This time, Susie had reserved an accessible room at the lodge.

Good News on Entering the Park

As we drove up to the entry station, we were unable to locate the free disability access park pass that I had acquired last year when we visited the park. But the Ranger issued another pass immediately, I guess because he saw the wheelchair we had in the back seat in case I needed it.

We were surprised and delighted when the ranger also handed us a guide to disability access in the park. It seems that the National Park Service is paying at least some attention to the needs of people with disabilities who visit.

We drove through the western end of the park to the lodge so Susie could register us at the Lodge, where we were staying. 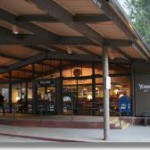 Yosemite Lodge at the Falls

to which we were assigned, are on the outer edge of the motel-type units. That’s a long commute to food, to the front desk, or to the shuttle bus that can be used to visit park sites on the Yosemite Valley floor.

When we got to our room, we discovered that there is no way to turn on an interior light when you walk in the door. There are lamps on each side of the bed, but they are across the room. There is also a ceiling light in the center of the room, but its control is a pull chain that is too high to be reached by anyone in a wheelchair.

We also discovered that electrical outlets were in very short supply and not really accessible. There were a total of 4 outlets that we could find: Two were behind the bed, one was behind a huge set of drawers, and one was at the vanity. None was reachable from the one working surface unless you happened to bring an extension cord. All but the one on the vanity required that we get down on our hands and knees to plug anything into them. 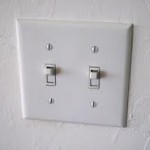 Light switches look like this, in case the Yosemite electrician is wondering

Seems like the electrician had the day off when this room was made accessible.

After Susie managed to get the room lit, we immediately checked the bathroom, which is always the first thing we look at when evaluating accessibility in hotel accommodations. This bath is very well designed. The wheel-in shower has a built in seat and a removable shower head placed within reach of

anyone who uses that seat. The towel hooks are set low enough to be reached by someone in a wheelchair.

It would also have been helpful to have more grab bars in the bathroom, one on every wall.

On the other hand, the closet place for hanging up clothes had the bar for hangers set low enough to be reached from a wheelchair. It also had those “theft prevention” hanger hooks that would be hard for anyone with hand mobility problems to manage.

All of the public spaces at the Lodge have door buttons that automatically open doors. And most of them worked most of the time. None were in evidence at the entry to the Ahwahnee Hotel.

On the other hand, public bathrooms at the Lodge are not easily accessible. There are no buttons to open the bathroom doors (which, in my experience, is common failing with public bathrooms). There is an accessible bathroom in the lodge with a lever handle, but it’s not posted as accessible for some reason. 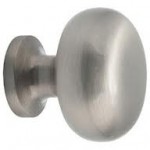 Round door knob, a no no

Note:on the subject of posting bathrooms as accessible, I have 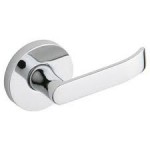 been noticing lately how the sign does not always mean what it’s supposed to mean. At a bathroom marked accessible for people with disabilities at a restaurant in Albany,California, the door knob was round, a shape not conducive to access.

Yosemite Valley itself is mostly flat, though wilderness. Notwithstanding the demands to 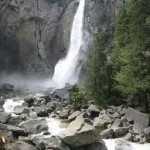 Lower Yosemite Falls. Everyone can get this close.

keep park lands in their natural state, the Park Service has built a wonderful accessible path to one of the central features of the park: Lower Yosemite Falls View.

Mirror Lake, another wonderful site in the park, is usually accessible only on foot or, if snow is present, by skis or 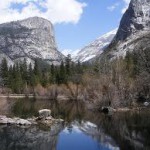 snowshoes. There is a road that is closed to the public. But with a disability tag for your car, you can drive the road and see the lake.

And, of course, if you look up, you can see the granite walls and features that what give Yosemite its magic feeling.

Being the kind of people we are, we sent our list of the good and the bad to accessibility officer at Yosemite. That person’s email address is yose_accessibility@nps.gov. We got a quick and encouraging response to that communication. However, I got no response to my request to be kept posted on changes made at the park. I guess I’ll do something about that when I get back from our next trip.

And Now for A Segue

My next trip is to Smith College to accept a Smith Medal for my breast cancer work. During the festivities, the documentary Pink Ribbons, Inc will be shown to the college

community. This film, on a topic near and dear to my heart, may be a theater near you soon. Check the website of the U.S. distributor for screening dates in this country. In Canada, the film is already in theaters. Get your tickets early and tell all your friends.