Accessibility is In The Eye of the Beholder

As many people who are in the disability community say, we are all, at best, only temporarily able-bodied. In the past year, I have left the world of the temporarily abled. I now walk sometimes with a cane and other times with a wheeled-walker. I need something to grab onto in the shower so I won’t fall down, and I need to sit in the shower, too. I get 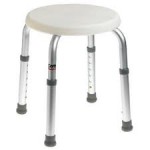 tired walking long distances. To be heard, I have to speak with the help of technology.

As I walk (slowly) around in the world these days, I notice how many people are hampered in someway by physical problems. I realize that what accessibility means to me is not necessarily what it means to others, even those who believe they are being responsive to people with limited mobility.

I thought a few examples of what I expected versus what I found might be illuminating.

On the Road: Thinking About Hotel Accommodations

When I traveled recently, I asked on two different occasions for hotel rooms that were accessible for people with disabilities. I told the reservations people that I didn’t need wheelchair accessibility, but I did need grab bars and a seat in the shower. The hotels were able to provide rooms with these facilities, but that was about as far as the accommodations for accessibility went.

I naively assumed, for example, that rooms with these accommodations might be located relatively close to the elevator core. In one case, the room I was given was about as far 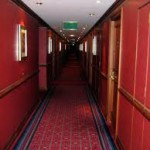 from the elevator core as one could possibly be. My pedometer showed a lot of steps, but I would have been happier accruing them by walking along the shore of Lake Louise, where I was visiting.

More generally, I also expected that thought would have been given to making doors to public spaces – not only the doors to the guest rooms, but also those used to enter and exit the hotel and the lobby restrooms – usable by people using walkers or wheelchairs. You know, those automated doors that either open when someone approaches

or open when a disability access button near the door is touched.

In both hotels, there were few if any automated doors; in one, there were no disability access buttons. It would have taken me quite a while to enter or exit the building through most of their doors if I hadn’t been accompanied by my partner who could open the doors and hold them open for me.

In the second hotel, the room I was close to the elevator core, but to get into the room I had to lift my rolling walker over a floor barrier that didn’t need to be there. The bathroom was tiny: my walker wouldn’t fit through the door. And all the bath towels were placed on shelf that would have been out of reach to anyone in wheelchair. That hotel had some automatic entry doors, but the main floor women’s bathroom had a non-automated door that is so heavy (or sticky) that it was hard for able-bodied women to open it. A man staffing the concierge desk right outside that bathroom commented to me on the need to fix the door, so the hotel knows about that problem. It’s not clear whether the management knows that where there is a button to make doors open automatically, the button didn’t work.

A Cabin in the Park

Hotels aren’t the only visitor facilities that present challenges to those of us who need some accessibility accommodations. On an earlier trip to a beautiful park in Oregon called Opal 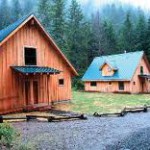 Creek, we were with a group that, in light of my limitations, had reserved the accessible cabin. There was a completely accessible bathroom on the main floor, but there were challenges in the kitchen. The dishes were all placed on high shelves that people of normal height had trouble reaching, and that would have been impossible for someone in a wheelchair to reach. The refrigerator had no handle, requiring finger dexterity and strength to open.

When these issues were brought to the attention of the Opal Creek management, the response was concern and a commitment to addressing the issues as soon as possible.

If only the corporate world that owns most everything would respond so positively.

Given our experience in Phoenix where we went for a weekend to watch the (wait ’til next year) San Francisco Giants at spring training, I think that kind of response from corporate interests may be a long time in coming. Here’s a “what were they thinking?” story. At a motel where we spent one night, our friend was placed in the accessible room (not that she needed it). It had a wheel-in shower alright, but you had to climb a flight of stairs to get to 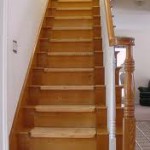 the room (the elevator didn’t go that high), and the room was not large enough to allow a wheelchair to circle the bed.

Is Separate the Same as Equal?

Possibly less offensive, but thought provoking, is our experience at a showroom warehouse in San Francisco recently. They had a concrete ramp to a side entry door, but the door was locked. When we pointed this issue out to the owner, he was quite apologetic and told us that all we had to do was call first. I 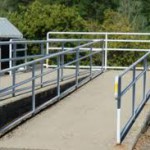 didn’t tell him (because I have trouble speaking) that I don’t even have a cell phone anymore, and don’t talk on the phone. Oh, and there was no phone number to call was posted on the exterior of the building.

The fact that I need assistance to walk and to talk makes me very sensitive to the fact that there all kinds of physical limitations that might pose challenges for people. I have focused here on the ones that have affected me so far. What am I missing? And what can we do about it?

This entry was posted in Disability, Health Policy. Bookmark the permalink.

12 Responses to Accessibility is In The Eye of the Beholder