NBCC — The Promise, the Process and the Problems

I have a reputation as an expert on the breast cancer and breast cancer advocacy organizations, gained during my 15 years as the (now former) Executive Director of Breast Cancer Action. Since it’s once again October — Breast Cancer Industry Month — I thought I should use that expertise to talk about an organization that does a lot of good, but seems to be misguided in a couple of important ways. That organization calls itself the National

NBCC’s logo. A little arcane from my point of view. Not to be confused with the National Board of Certified Counselors.

NBCC promotes nuanced messages about breast cancer, does not overhype treatment news, and encourages an evidence-base approach to treatments. It also encourages people to move beyond breast cancer “awareness,” which Lord knows we have enough of.

But, despite its name, NBCC does not represent all breast cancer organizations. No group does. It is the brainchild and under the close control of Fran Visco, its founding Executive Director and now President. Like many charismatic leaders, Fran surrounds herself with people and groups who agree with her, declining to confer or

Fran Visco in a happy moment.

collaborate with those who disagree or don’t sing her praises. Unfortunately, that limits NBCC’s effectiveness.

NBCC’s current focus is on a “deadline” to end breast cancer by January 1, 2020. When they field tested this campaign with some of the breast cancer researchers with whom they work, they were told in no uncertain terms that setting a deadline would be counter- productive to research. But set a deadline they did.

Of course, they are not the first to set a deadline for solving the breast cancer problem. Susan Love set one in the mid-90’s. For what happened to that see, Susan Love: Time to 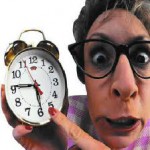 Deadlines can be very troubling.

Think Before You Pink. And how many times have we been told by doctors and researchers  that, in the next 5 or 10 years, the problem will be solved?

One problem with deadlines is that they assume that you have control over the problem you’ve identified. NBCC does not have that control. It’s an advocacy organization. It doesn’t do or fund research, though a lot of researchers work with them. NBCC also doesn’t control the legislative agenda for research, try as they might to do so. Under these circumstances, how might they expect to meet their deadline? They have a stated strategy, but it doesn’t seem to include working with other groups that know a thing or two on the topics being addresses. The NBCC strategy is: leave it to us.

I also should say that I think ending breast cancer is a promise that no one can keep. As I wrote in Breast Cancer Action’s Cancer Policy Perspective, breast cancer has been with us since before the Greeks. I think it will be with us always. The questions are (1) can the incidence be reduced and (2) can the treatments be improved?

What will happen when 1/1/20 rolls around and breast cancer persists? I assure that you NBCC will find some other mission to pursue that will allow them to continue to raise funds. Will they acknowledge failure? I doubt it. Barring a miracle, I won’t be around to witness that date, but I hope some people who read this will be here and will remember.

NBCC has been active in lobbying Congress, and has had some success getting bills addressing breast cancer research passed. As far as I know, their efforts have focused on the Department of Defense (DOD) Breast Cancer Research Program, environmental breast 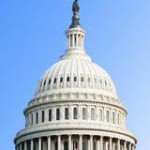 Congress: Where OUR representatives work

cancer research, and, most recently, an Act to Accelerate the End of Breast Cancer.

The DOD program — which drives funding through the DOD: it does not restrict its funding to the military — is NBCC’s longest-standing success. For background on the program and some of its challenges, see ERA of Hope or Hype?

What all these legislative efforts have in common is a commission of some sort to guide  the program efforts. The commissions, set up by the laws for which NBCC advocates, are composed of lay people and scientific experts. The participants are selected with NBCC approval.

These are efforts funded with taxpayer dollars. Why should NBCC and Fran Visco get to decide who the deciders are? Who elected them? And who will NBCC veto who is important 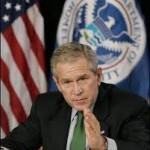 This guy said he was the decider, and we elected him.

The competition among breast cancer organizations — for funding and for influence — is fierce. It leads to deadlines and promises that can’t be met and to steps that are more effective at achieving influence and dominance than at addressing the incidence and treatment of the disease. Witness the Komen Foundation, for example. It’s time for leaders who can bring people and organizations together. We need new approaches. In fact, I think the movement needs new leaders.

3 Responses to NBCC — The Promise, the Process and the Problems